Electricity in your Greenhouse

As the days get shorter and colder, you might think about bringing an electrical power supply to your tunnel or glasshouse. Electricity can power lights, heaters, soil warming cables, propagators and climate controllers, letting you grow a wider range of plants over a longer season.  But it’s not just a matter of running an extension cable out from your house; domestic cables and fittings are neither shockproof nor waterproof enough for safety in greenhouses.  Electricity and water are a lethal combination.  If you only need working lights you could use wireless battery or solar-powered lights with high-efficiency LED bulbs.  If you already have a low-voltage garden lighting circuit nearby you could take a short spur off it, provided it can handle the extra load. 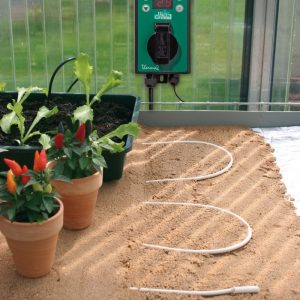 If you need mains power, you must get a registered electrical contractor to do the specialised wiring work. At the least, the supply from the house should be through Steel Wire Armoured (SWA) cable buried at least 50-60 centimetres underground with warning tape above it.  It should pass through a Residual Current Device (RCD), which monitors the flow of current out from the distribution board and back and trips instantly if they are not the same (i.e. current shorting elsewhere). All sockets, plugs and fittings should be of heavy-duty industrial type with a much higher Index of Protection (IP) rating than domestic ones.  They are not cheap, but neither is human life! 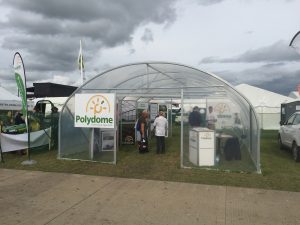 Great first day at the National Ploughing Championships, very busy and not a drop of rain.  Traffic management seemed to go very well.  If you haven’t been come and see us on Row 8 Block 3 Stand 195.  A lot of interest in Livestock Tunnels for calves and for sheep as well as Polytunnels for gardening.

Mr Tanguy de Toulgoet, is re running his training session to help people make the most use out of their Polytunnels.  It is on the 24th of October and he is in Durrow, County Laois.

As before he will teach on plant production, herb drying, companion planting, winter storage and much more.

The cost is 50 euro per person, it is a half day course and starts at 10am and  finishes at 1pm.

People who mention Polydome will get a 20% discount on the cost of the course.

Here is a link to a leaflet about it:  Course Leaflet 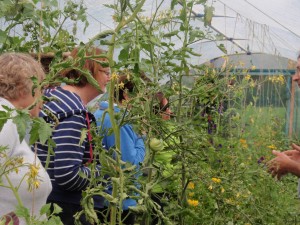 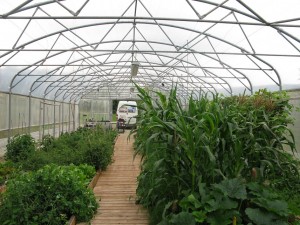 We recovered one of our Verticlair Polyunnels from Filclair, I think this photo is lovely.  As well as manufacturing Polytunnels we are agents for Filclair from France who we source Multispan structures from.  The Verticlair has straight sides and this particular structure has a fully automatic roll up side ventilation system.  A great Polytunnel cannot make a good gardener out of you put it is a tool that a good gardener can do great growing with.

A customer of ours – Mr Tanguy de Toulgoet, is hosting a training session to help people make the most use out of their Polytunnels.  It is on the 3rd of October and he is in Durrow, County Laois.

The cost is 50 euro per person, it is a half day course and starts at 10am and  finishes at 1pm.

Here is a link to a leaflet about it:  Course Leaflet 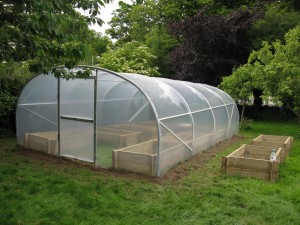 A recent construction we did in Dublin was a 4.5m x 8m Polytunnel.  This Polytunnel had ‘side purlins’ fitted which are an optional extra providing extra strength particularly against wind.  The customer also ordered a large number of raised beds which we also supply.  This Polyunnel also has the optional attractive finish of having the ends of the tunnel without pleating and folding the polythene.  This feature is made possible by having an aluminium rail fitted over the end hoop so that a separate cover can be fitted to the gable end (and fixed into the rail over the end hoop as is the polythene on the roof).

We are pleased to configure our Tunnels to suit each customer from a wide range of options.

We have issued a new price list for our Polytunnels.  This gives updated prices of Polytunnel kits including delivery to most parts of Ireland.  The new Polytunnel price list can be accessed on the following link.

Whether it’s Bali or Ballybunion, everyone wants to go away for a break.  So what happens to your tunnel or your glasshouse while you’re gone?

Automatic watering is ideal.  Be sure to set the controls well in advance so you’re sure it’s working well and regularly, and delivering enough water.  Ventilation is easier; you can leave the vents wide open in mid-summer without fear of night frost but automatic vent openers are less liable to storm damage.  They need no electricity and are easy to fit.  Wedge doors nearly closed or screen them with wire mesh to keep out pets and wildlife.

Bribe a neighbour to keep an eye on it with free produce or a promise of looking after theirs later.  Automatic watering and ventilators are good but nothing beats the human touch: unexpected problems can crop up (pun deliberate) and the comings and goings of neighbours deter thieves.

Move out pots to a sheltered, shady spot where they can get rain or be watered if needed.  Remove more bottom leaves from your tomato plants than usual: the leaves on the top 70cm of the plants contribute most to their growth.  This reduces their need for water and lets more fresh air around the plants, which helps control fungus diseases.

Remove flowers and developing fruit from plants to reduce the amount of unwanted and over-mature fruit growing while you’re away.  It also further reduces the plants’ need for water.

Tidy up and clear out any weeds; also dead and dying leaves, dropped fruit and other plant remains tha 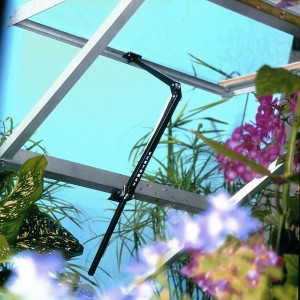 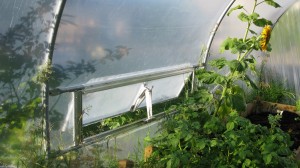 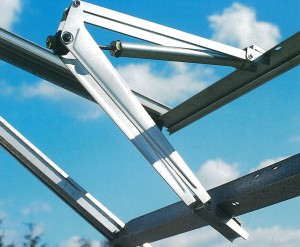 Never mind how cold it is in your garden; the sun is getting higher every day and even short clear spells will allow it to build up a lot of heat in your glasshouse or polytunnel. You might think this is a good thing, but not always so. Lettuce seed won’t germinate if it’s too warm, and temperatures above about 35°C (95°F) will destroy the red pigment in ripening tomatoes so they never colour up properly. Overheated plants need more water to keep cool. As well as that, high temperatures put plants under stress and promote diseases such as grey mould and pests such as red spider mites. You can’t stand there 24/7, thermometer in hand, to open and close doors and vents with each change in temperature. Ordinary mortals adjust the ventilation once in the morning for the expected daytime temperatures and once in the evening for the night, and that’s near enough most of the time. The weather forecast can help you decide how much ventilation to give in the morning. A recording thermometer can show you how you did today, helping you to fine-tune your settings for tomorrow. End doors alone give enough ventilation for most polytunnels up to about 20 metres long. Side windows, roll-up vents and louvre vents are good but not cheap. Glasshouse vents can be fitted with gas-filled struts that automatically push them further open when they get warmer, without needing electricity. The best ventilation comes from a through flow of air, so open both ends of a polytunnel or more than one window in a glasshouse. Open many vents a little bit instead of opening two vents wide to reduce draughts. Be cool! 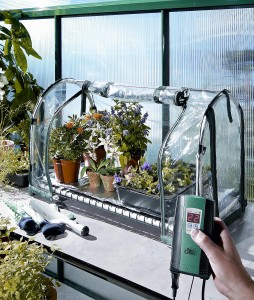 Traditionally, people sowed vegetable seeds in their gardens on Saint Patrick’s Day.  That was because they were off work and free to do it rather than weather and soil conditions being suitable.  But, right enough, the soil is often dry enough to dig and warm enough for seed germination about then.

If you have a glasshouse or polytunnel you don’t have to wait for all that.  You can sow  crop seeds earlier under cover and have plants to put out instead of seeds, gaining several weeks of extra growth.   Sow leafy crops like cabbages and lettuce in modules for planting out later, and also a few seeds in the border soil inside to mature early.  If you have lots of room, keep one courgette plant growing inside until the outdoor-planted ones start fruiting.  You can then chop it out and use the space for something else, but it will have been cropping for weeks by then.

Tap-rooted plants such as carrots can’t be transplanted and don’t take kindly to modules, but you can still sow some inside for early crops.  Freshly-dug baby carrots, washed instead of peeled, and eaten raw are fit for a king.

Seedlings are easiest to raise in a heated propagator.  If using it inside the house carry the seedlings  out to a glasshouse or tunnel in the propagator with the cover closed to protect them from cold winds as the temperature shock would be too much for them.

The sun is getting stronger, so be prepared to open vents or doors on sunny days.  But make sure to close them at night!  Throw a sheet of bubble-wrap or fleece over plants on frosty nights.