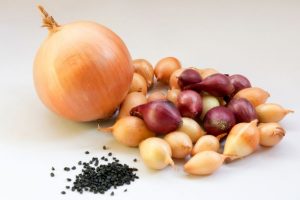 Most people plant onions as sets; semi-mature bulbs which will hopefully grow bigger and be harvested before they go to seed. But you can also raise onions from seed sown in your greenhouse instead of from sets planted later. This is especially useful on cold, wet soils or in cold, wet springs, as onions cannot tolerate those conditions. Seed-raised plants are cheaper than sets, you have more varieties to choose from, and the plants are less likely to bolt or be pulled out of the ground by birds. On the downside, seedling onions need a longer growing season so February is definitely the last month for sowing, and the longer growing season means more time for pests and diseases to attack them.

Sow the black, angular seeds thinly in a seed-tray, or in modules at up to five seeds each. Keep them at about 10-15°C. The seedlings come up in loops, and you should prick them out from seed-trays into pots before they pull their tips out of the compost and straighten up. If multiple seedlings come up in modules, either leave them to push each other apart later as they grow, or single them with a fine-pointed scissors to give the one remaining plant room to grow a bigger onion. Keep the compost neither bone-dry nor saturated. Grow on the plants in bright, cool conditions until they have two or three leaves, harden them off well and plant them out at about 15cm apart each way. Wider spacing gives you bigger bulbs, and tighter spacing gives smaller ones.

You can also plant sets in pots and give them a head-start under cover, planting them out only when conditions improve.

Basil is easy to buy from the shops, but you can grow a wider range of types yourself at lower cost to you and the environment. The type sold in non-returnable pots is usually sweet basil suitable for salads and pesto, but there are also cinnamon and lemon basil, varieties with purple leaves that look great in green salads and spicy or liquorice-flavoured Thai varieties that combine well with Asian food.

Basil is a fast-growing, tender annual that needs lots of light, heat and water. Being very sensitive to cold, it is an ideal candidate for tunnels and glasshouses, especially in our unpredictable summers.  It improves the flavour of tomatoes when served with them, and some say that it also does so when grown with them.  It grows best in well-drained acid or neutral soil.  Sow a succession of crops, but just a couple of plants each time is enough for regular use unless you want extra for pesto.  Either sow them in cell-trays or in situ in the greenhouse soil, thinning them to single plants as soon as they are big enough to see.  Use a scissors to avoid root disturbance.  Thin or place the plants to about 30 centimetres apart.  Harvest leaves as soon as the plants are about 20 cm tall, by cutting off shoot tips.  Leave on the lower leaves until you discard the plant; they will produce the food to grow new shoots from the lower side-buds.  Even if you need no basil, cut off the tips to prevent flowering (which makes the leaves bitter) and encourage fresh sprouts to grow.  Surplus leaves can be either frozen for later use or composted, and the flower-buds are edible too.

Sweet Corn (a post intended for April, sorry for the delay) 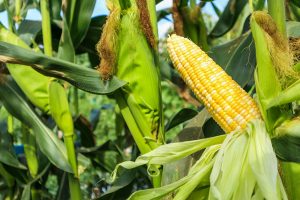 You can grow sweet corn outdoors in a good summer, but for a more reliable crop you need a greenhouse. April sowings are best done in pots but in May and June seed can be sown directly into its final position.  Sow one fresh seed about 1cm deep per tall pot of free-draining compost: if using older seed sow multiple seeds per pot and single the seedlings later with a scissors.  Keep the compost warm and not too wet.  Sweet corn roots go very deep and do not tolerate confinement, so plant out your crop as soon as possible.  Choose the tallest space available, although it won’t matter if the tops are bent over at the roof.  Dig large planting holes 30cm apart in a square block to aid pollination.   Fill them twice with water and add in some compost when planting; corn needs plenty of water and feeding.

If space is short, you can plant corn between rows of greens due for harvesting soon. Keep watering and feeding.  When the sticky tassels appear on the lower female flowers, shake or tap the plants gently each day to shower pollen down from the male flowers above and ensure well-filled cobs.  Cross-pollination gives poorly set and less tasty cobs, so if growing different varieties try to plant them as far apart as possible.  The cobs mature close together, so sow later crops to extend the season.  The cobs are ripe when the tassels darken and wither, and punctured kernels leak milky fluid.  They dry up and get starchy very soon, so harvest them promptly, cook then immediately for four minutes in boiling water, and enjoy.