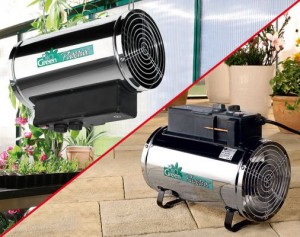 December usually brings the first hard frosts of winter.  Tender plants can be killed as their sap freezes, expands and bursts their cells.

Polytunnels don’t hold in the heat as well as glasshouses unless they have a ‘thermic’ polythene cover.  On cold nights it can be better to have some air movement through a polytunnel than to seal it up tight and let frost build up inside.  See also  http://www.polydome.ie/blog/?tag=polytunnels-frost-protection .  Glasshouses can be shut up tight, making sure that there are no gaps or broken panes.

Electric, gas or paraffin heaters can provide extra heat – at a price.  Unwanted candle stubs produce more heat than you might think when left burning all night.  Horticultural fleece can be wrapped around individual plants and their pots if you take it off when the sun shines, and bubble-wrap sheeting can be used in the same way or fixed inside the greenhouse walls to insulate them (you lose some light).  Containers of water absorb heat during the day and radiate it back out at night, like storage heaters.

Watering should be reduced to a minimum to concentrate the plants’ cell sap and lower its freezing point.  Don’t stop watering!  It can get surprisingly warm in a greenhouse during sunny spells, and plants will be dying for lack of water if not checked regularly.  I lost plants that way.

The heat given off by large amounts of fermenting compost or farmyard manure was used in the past to warm crops such as pineapples.  It still works, but most modern greenhouses have neither the space nor the cheap labour to do that today.  Soil-warming cables can protect plants from quite hard frosts in the same way, or for the occasional really cold night you could warm small pot-plants in an electric propagator.