Mizuna is one of the oriental greens that Europeans should grow and eat more. It’s best grown rather than bought because it needs to be eaten right after harvesting for maximum flavour and nutrient value, though it will keep for a couple of days in the fridge.  Like lettuce, you can sow seed little and often all year round in a glasshouse or tunnel.  September sowings will produce deeply cut leaves up to April or May: single leaves can be cut off after about three weeks and whole heads after six to eight weeks.

Mizuna likes moist rich soil, so dig in plenty of compost or other organic matter before sowing. Sow the seed about a centimetre (half an inch) deep in drills about 30cm (12 inches) apart.  Protect the seedlings from slugs.  Keep it well watered and ventilate on sunny days – it is prone to bolting in hot dry conditions.  If it does bolt remove the flowering stems right away to keep it leafy and sow another batch to replace it.  Don’t worry if it wilts after a frosty night: it is hardy and usually recovers.  It is a member of the cabbage / brassica / crucifer family so don’t sow it in the same ground as any of its relatives for at least three years to prevent disease build-up

Mizuna has a milder flavour than either mibuna or rocket, and is good in mixed salads. Like spinach it can be steamed, boiled or stir-fried but it shrinks a lot, so harvest plenty.  ‘Kyoto’ is a good variety to try. 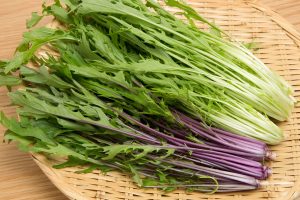